The virtual currency scam became a disaster, and the bitter master cleared his bag 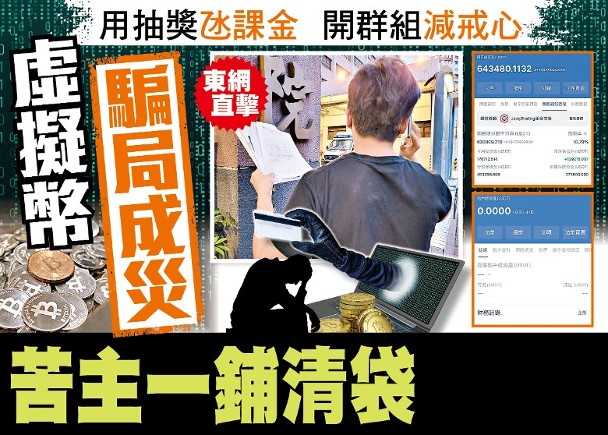 The virtual currency circle has been in great storms recently. Last week, the prices of dozens of virtual currencies plunged into the water, and multinational investors lost a lot of money. In Hong Kong, a virtual currency investment group was suspected to have exploded at the end of last month, involving at least hundreds of investors. People in the circle estimated that the loss of the entire group was as high as several hundred million yuan! In response to the inquiry, the police confirmed that they had received at least two reports from relevant platform investors for help. The two lost more than 40,000 yuan and 230,000 yuan respectively. The police have classified the case as obtaining property by deception, and no one has been arrested so far. As for the companies involved in the investment group involved, they claimed on the Internet that "the funds were detained by the US regulatory authorities", and some bitter owners said that the balance of the investment account had suddenly dropped to "0", fearing that the millions of investment funds in their names would be wiped out. return.

The company that the investment group belongs to has been actively soliciting customers as early as the beginning of the year, claiming that it can invest in foreign exchange futures with virtual currency on behalf of customers. Participants can invest up to 4% of the principal every day, and the income is only a lot more. According to the participating investors, At first, I did taste the "sweetness", and the return even doubled the principal, so some people invested more funds and encouraged their relatives and friends to participate.

A bitter master told the story of being lured into the "pirate ship". In February, he learned about the online investment tool from a friend. He initially used 50,000 yuan of capital to "test the knife", but he did receive 4% every day. To a return of 10%, he explained that investors need to convert capital into virtual currency first and bind them for 7 or 14 days. If the funds are unsealed on the day of loss, after the 7 days expire, investors can get back the principal at most 80%, and 90% can be withdrawn on the 14th. During this period, investors have indeed made quick money, and the process of withdrawing money is also smooth. They only need to check their deposits through the mobile app, which is convenient and fast. The deeper you step on it, not only do you invest by yourself, but you also invite friends and relatives to make money together.

Last month, the investment company launched a publicity campaign, claiming that a big lucky draw will be held from the 18th to the 28th. Participants only need to bind the principal and can win a virtual currency equivalent to about US$4,000. On the morning of April 29, the investor found that the value of the deposited virtual currency was displayed as "0". The company claimed that because it was detained by the US regulatory authorities, the investor was required to provide 30% of the principal as tax, and then the principal was recovered. gold. At this time, many investors just woke up from their dreams and suspected that they had fallen into a scam. In the afternoon of the same day, the content of the investment website was emptied, and the entire investment platform disappeared without a trace. The reporter tried to find the relevant application on the mobile phone, but did not find it. I believe it has been removed from the shelves.

When this newspaper inquired with the police about the alleged fraudulent investment company, it confirmed that it had received reports from at least two people, involving about 47,000 yuan and 237,000 yuan respectively. The designated website invested in virtual currency, and then deposited the money into the man's designated bank account. Later, he found that he could not receive the relevant returns or refunds. Suspected of being deceived, he reported to the police. Both cases are listed as obtaining property by deception, and no arrests have been made.

Fang Baoqiao, honorary chairman of the Hong Kong Information Technology Chamber of Commerce, said that the biggest feature of cryptocurrencies is that they have the function of hiding their identity and are difficult to track.

Fang also questioned that the above investment scams are just using foreign exchange futures as a guise to defraud investors who have little knowledge of virtual currencies into the game. He explained that there is no problem with cryptocurrencies, but some people use cryptocurrencies to commit crimes. Just like London Gold, he urged the Securities and Futures Commission or the financial management The bureau and others strengthen the supervision of these platforms that use cryptocurrencies to trade.