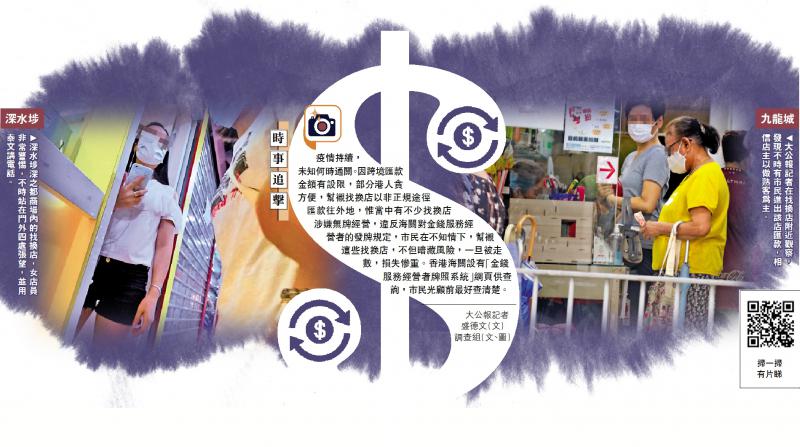 The epidemic continues, and it is unknown when the customs will be cleared. Due to restrictions on the amount of cross-border remittances, some Hong Kong people are greedy and convenient, and help money changers to remit money to other places through informal channels, but many of them are suspected of operating without a license, violating the customs' licensing of money service operators It is stipulated that people who help these money changers without knowing it not only hide risks, but once they are counted, they will suffer heavy losses. The Hong Kong Customs and Excise Department has set up a "Money Service Operator License System" webpage for inquiries. It is best for the public to check it before patronizing. \Ta Kung Pao reporter Sheng Dewen (text) investigation team (text, pictures)

According to the commonly known "Anti-Money Laundering Regulations" that Hong Kong has implemented since April 1, 2012, any person engaged in remittance or currency exchange services must apply for a license from the Commissioner of Customs and Excise. Operating money services without a license issued by the Commissioner is a crime. Upon conviction, he can be fined 100,000 yuan and imprisoned for six months.

However, a reporter from Ta Kung Pao recently discovered that many of the money changers in Kowloon City, Sham Shui Po, and Yuen Long, where there are many money changers, were suspected of operating without a license, violating the licensing requirements of the Customs in the “Regulations”. Citizens who help, lose their money at any time.

Due to the closure of the epidemic, tourists have almost dropped to nearly zero. In the past, money changers specializing in tourists and remittance businesses in other places have closed down. However, in the other side, many money changers operate without a license. Once a money changer was suspected of money laundering because of the funds processed, the account was frozen and eventually closed down, causing the local jeweler to lose 1 million yuan.

Guests admit that they don’t know that they are unlicensed

The reporter recently visited the money change shops in Kowloon City, Prince Edward, and Mong Kok, and compared the search results of the "Money Service Operator License System" webpage of the Hong Kong Customs and Excise Department. They found that the money change shops located in Prince Edward and Mong Kok, no matter how big they are. All shops hold relevant licenses. But in Yaqianwei Road, Kowloon City, the reporter compared two money changers and found that none of them had a license, which was suspected of violating customs regulations.

At the "XX Money Changer" in Yaqianwei Road, when the reporter inquired about the remittance, the clerk turned down the reporter after a little thought, saying: "The handling fee is about 20 yuan, but we will stop temporarily. We have to wait for Azai to visit Thailand. Return to Hong Kong first served". However, the reporter has been observing the neighborhood for a long time, and from time to time he found that Thai people are entering and leaving the store to remit money. It is believed that the owner is mainly engaged in regular customer business.

Another money changer named in English in Yaqianwei Road, also has customers coming. The reporter interviewed Mr. Zheng, a retired person who had just remitted the money. Zheng pointed out that he did not know that the shop was unlicensed, and he usually helped the shop. This time, he sent HK$2,000 for living expenses back to Thailand without any problems. Zheng said: "They all talk about credit, so they will continue to use it. Every time, I send thousands of mosquitoes' living expenses back."

also just finished the remittance. The Chen sister who has been in Hong Kong for more than 40 years said that she thought the store had a brand. However, they were surprised when prompted by reporters that the store was not licensed. They said this time: "The main purpose of sending money back to Thailand is to do good deeds. Usually, they will remit several hundred to several thousand yuan from time to time. This time, they will remit 6,000 Hong Kong dollars. The exchange rate is less greedy than that of banks."

When the reporter stepped forward to check whether it was possible to remit money and provide currency exchange, the clerk saw that it was a "live customer" and switched to the half-salty Cantonese to say: "I don't do it at home", but the reporter saw that there was still a counting machine at the counter. And the money counter, there is a Thai text sticker on the door. I believe that the money changer will only do business with regular customers from the same town for the sake of safety.

In Hong Mian Wai, Yuen Long, the reporter also found that a money changer had not obtained the relevant license, but the shop might have been out of business for several days.

Some legal circles have pointed out that money changers in Hong Kong pay less attention to the legality of customer funds. Funds may be illegally obtained from illegal gambling, illegal fund-raising, telecommunications network fraud, etc. This has violated money laundering regulations. When Hong Kong people go to the Mainland to buy properties or Hong Kong real estate agents remit money to the Mainland, they only hope that the cost of exchange rates will be as flat as possible, while ignoring the risks involved.

There are old banks who often have to remit money to other places. Don’t be greedy, especially when Hong Kong people go to the mainland to buy properties, and when it comes to remitting large sums of money, it’s best to find a reputable institution such as a bank.