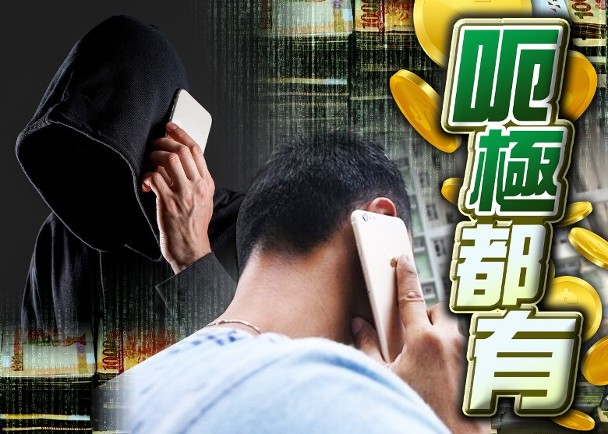 A 40-year-old housewife lost a lot of money in an electric trap. A woman surnamed Shen received a call from a self-proclaimed mainland official. She handed over her bank account number and password as instructed by the other party, and handed over a "guarantee" as instructed. It was finally discovered that within 10 months, she had been transferred and defrauded a total of contracts. HK$65 million. This case is for the time being the electric fraud case involving the most money this year. The case was classified as "obtaining property by deception" and was handed over to the Sham Shui Po District Crime Squad for follow-up. No arrests have been made so far.

Yang Zhenyu, Senior Inspector of Sham Shui Po Police District Serious Crime Unit, said that on April 3 this year, Sham Shui Po Police District received a report from a woman, saying that she received a call from a fraudster claiming to be an official of the Central Liaison Office in June last year. It was falsely claimed that the victim was involved in a case of false information on the release of the new crown vaccine in the mainland, and the victim was required to log in to a fake website of the Supreme People's Procuratorate of China, and enter the bank account number and password into the website. In addition, from June to September, the victim met with four swindlers five times, and received mobile phones provided by the swindlers, claiming to be used for communication. In fact, these mobile phones are pre-installed with malicious programs, the victims insert their own calling cards, and the fraudsters can intercept the one-time password for online banking.

During the last meeting, one of the fraudsters handed over a fake business contract to the victim, claiming to assist the victim in explaining the whereabouts of the money to the bank, so that the bank thought the victim had legitimate business dealings with the collection company and avoided bank scrutiny. Later, the fraudsters demanded the victim transfer a total of HK$46 million to a designated account, which is the same as the account shown in the fake contract, on the grounds of paying a "guarantee".

The victim never found out until the scammer asked the victim to remit the money. The victim said that he had no money, and handed the scammer's phone number to her husband to answer. The husband suspected that his wife had encountered a swindler. After checking the bank records, he found that another 19 million Hong Kong dollars in the account had been transferred, that is, the victim lost a total of 65 million Hong Kong dollars. The victim then called the police for help the next day (April 3).

According to the current investigation, the fraudsters speak fluent Mandarin and do not know the victim. Whether the swindlers are from the Mainland, how many swindlers are involved, and whether there are other victims remains to be investigated.

Lu Hongji, senior inspector of the Anti-Deception Coordination Center of the Commercial Crime Bureau, pointed out that the police received 102 cases of electrical fraud in January this year, compared with 83 cases in the same period last year, an increase of 22.8% year-on-year. Among the 102 cases this year, there were 51 cases each of "Impersonate Officials" and "Guess Who I Am", or 50% each. The loss in January this year was HK$43.44 million, down 36.2% year-on-year.

Lu pointed out that the "pretending to be an official" case is more dangerous because fraudsters can manipulate online banking accounts and let the victims clear their bags. In order to obtain the victim's bank information, in addition to using a fake webpage as in the above case, the fraudster will also send a fake link to the victim to allow the victim to download malicious programs. Victim's online banking information, interception of one-time password (OTP).