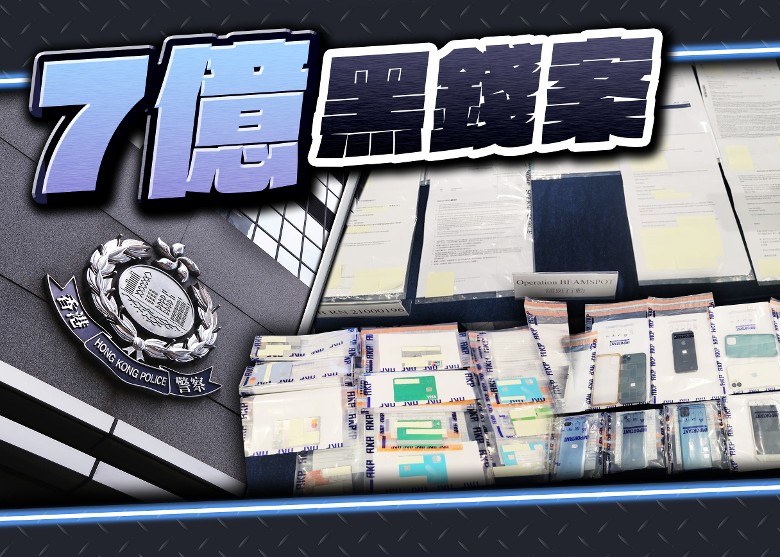 The police received intelligence earlier that a bank account was involved in suspicious transactions and funds from unknown sources. After investigation, the funds in these accounts were related to many fraud cases in recent years, including phone fraud, investment fraud and online fraud. In love scams, the amount defrauded was as high as 272 million Hong Kong dollars, and the money involved was deposited into the accounts.

Superintendent Zou Xiangyou of the Wealth Intelligence and Investigation Division said that a criminal group active in the local area would use money to solicit and induce local citizens to open an account in a virtual bank as a puppet account. The group has also set up a control center in the Mainland. After successfully recruiting citizens to open an account, the local members of the group will hand over the online account number and password of the account involved in the case to the Mainland member, and remotely manipulate the puppet account for money laundering.

Zou Xiangyou continued to point out that when the police were tracing the flow of funds in the puppet account, they found a large amount of deposits in the account. The funds came from victims of different scams, involving at least 43 scams that occurred between April last year and August this year. Cases, including 40 phone scams, two investment scams and 1 online love scam. The victims were 10 males and 33 females (23 to 85 years old). They reported as students, housewives, retirees, clerks, etc., involving a total of 272 million Hong Kong dollars.

One of them, a 76-year-old rich woman, received a call from a fake courier earlier, stating that a postal package was involved in mainland crimes. The call was later transferred to an officer of the mainland law enforcement agency who claimed that the victim instructed the victim to transfer money to check whether the deposit involved black money. That can help her to remove the suspicion. The victim then transferred 82.2 million Hong Kong dollars to the account provided by the fraudster in 196 times between November last year and February this year.

Senior Superintendent Cheng Liqi of the Wealth Intelligence and Investigation Division stated that the police quickly contacted mainland law enforcement agencies for intelligence exchanges and conducted a joint arrest operation codenamed "Flare" yesterday (7th). The Hong Kong police arrested 12 men and 2 women (23 to 75 years old) in various places throughout Hong Kong on suspicion of "money laundering", including a 31-year-old male protagonist who was responsible for soliciting others to open accounts. During the operation, the police seized a large number of exhibits, including computers, mobile phones, and account-opening documents related to the case, and also frozen some 1.2 million Hong Kong dollars in the bank accounts of some arrested persons, which are believed to be the proceeds of the crime.

On the other hand, the mainland law enforcement agencies also arrested 7 mainland Han and a local woman (20-29 years old) in two premises in Nanshan District, Shenzhen yesterday. It is believed that they were instructed by their masters to manipulate the Hong Kong account and transfer the money involved, and 8 people were involved. He was arrested and detained on suspicion of "conspiracy to defraud", "money laundering" and "helping information cybercrime activities" in the Mainland.

The police believe that the operation has successfully cracked down on a cross-border money laundering criminal syndicate, and the funds involved in the case were eventually transferred to the syndicate's overseas accounts. As many as 85 puppet accounts were manipulated. Together with the funds involved in the above fraud, the syndicate processed a total of HK$740 million. The police are tracing other sources of money and investigating whether other criminal activities are involved. The operation is still continuing, and it is not ruled out that more people have been arrested.

Huang Shouluo, Senior Inspector of the Wealth Intelligence and Investigation Division, pointed out that whether citizens use their bank accounts or provide them to others for illegal purposes, they may constitute money laundering crimes. Once convicted, the maximum sentence is 14 years in prison and a fine of 5 million. The Hong Kong dollar, the public must not try the law.