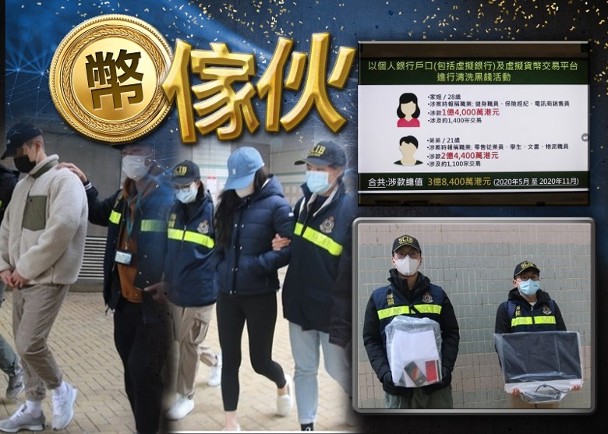 At the beginning of this year, Hong Kong Customs identified a pair of local sisters based on intelligence analysis and suspected that the two opened multiple physical bank, virtual bank and virtual currency trading platform accounts to receive and process money from unknown sources and participate in money laundering activities. After several months of in-depth investigations, the Haiwei Group took action today (28th) to raided a residential unit in Yau Tong and arrested the brothers on suspicion of money laundering. The two brothers were 21 and 28 years old, believed to be last year. From May to November, a total of 384 million Hong Kong dollars were processed using the above accounts, and the arrested persons have been released on bail pending further investigation.

During the investigation, the customs found multiple suspicious places in the bank accounts of the two persons. First of all, the account opening information of the two people claimed to be in different occupations. Among them, the sister was actually engaged in clerical work, but was reported to be an insurance broker and a telecom salesperson when opening the account. The two accounts were opened in different banks on the same day. The younger brother is a college student. He opened accounts in 4 physical banks and 2 virtual banks in Hong Kong on the same day. They all reported different occupations, including retail practitioners, students, clerks, logistics staff, etc.

In addition, the income of the sister involved was not commensurate with the large bank deposits. During the period of money laundering, the two reported incomes of HK$12,000 and 15,000 respectively. However, the two tax returns showed that the sister did not file a tax report when the case was involved, and the younger brother In one of the years, there was only HK$1,400 in income, but the bank accounts of two people had a transaction amount of more than HK$300 million, which was not commensurate with their financial background.

There are also suspicious points in the mode of depositing in its bank accounts. The deposits of two people came from more than 380 different personal bank accounts, and a total of 2,500 transactions were made by bank transfer. Among them, the deposit amount exceeded 100 million Hong Kong dollars, which was the highest number of transactions in a single day. There were even 143 times, with the maximum amount of 3 million Hong Kong dollars, and personal account transfer deposits accounted for 30% of its total funding sources. In addition, 2 people also used cash deposits. Some people used the ATM to deposit cash many times in the middle of the night. Each time they deposited a total of approximately HK$100,000 in a short period of time. The total number of cash deposits was 617. , Involving a sum of HK$31 million.

In addition, the two people will use the virtual currency trading platform to conduct transactions. The investigation found that the younger brother had an account on the platform. The account had conducted a large number of unusual and huge transactions involving a sum of 38 million Hong Kong dollars. The customs believes that someone converts virtual currency into U.S. dollars through this account, deposits it in the bank account under the brother's name, and then transfers it to other personal and company accounts. It is believed that someone uses the platform to receive virtual currency and uses its highly concealed assistance. Others deal with money from unknown sources and hide the source and destination of the funds, making it more difficult for law enforcement officers to investigate.

The Senior Investigation Director of the Organized Crime Investigation Division of Customs, Yu Yao-wing, said that he will conduct in-depth investigations into the sources of funds from unknown sources, and analyze the background of the arrested persons, the source of funds and the flow of funds, etc., and it is not ruled out that more people will be arrested. In addition, a total of about 130,000 Hong Kong dollars in assets in the names of the arrested persons have been frozen, and it is not ruled out that they will apply to the court for confiscation later.