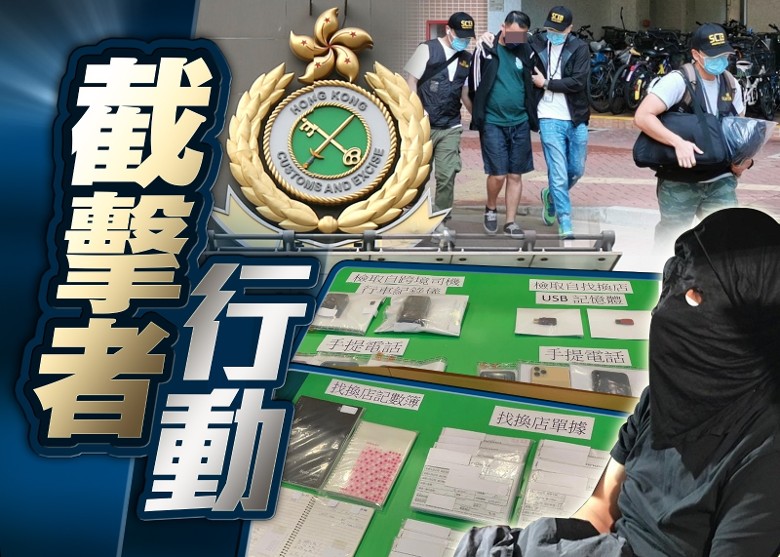 The Hong Kong Customs took enforcement action code-named "Interceptor" from 19 to 23 this month and successfully detected a suspected money laundering case involving approximately HK$170 million. In the action, 5 men were arrested, including the driver of the cross-border vehicle. For the first time, Customs has detected a case of money laundering assisted by drivers of cross-border vehicles.

According to Hu Weijun, Senior Supervisor of the Organized Crime Investigation Division of Customs, since May this year, Customs officers have discovered that some cross-border passengers’ cash declarations are suspicious, so they have launched an in-depth investigation and discovered that there are suspected money laundering syndicates through hiring cross-border vehicles. The driver has repeatedly transported large quantities of unidentified cash to Macau and Zhuhai via the Hong Kong-Zhuhai-Macao Bridge Port.

Acting Supervisor of the Customs Wealth Investigation Division, He Meiling, said that the customs subsequently locked down two cross-border seven-person car drivers. They reported a total of 17 times to leave the country with large amounts of cash for their own use. The amount of each declaration ranged from 3 million to 27 million. The total amount is about 170 million Hong Kong dollars. After further investigating the financial background of the two, it was found that they did not have any property and their income was unstable. They believed that the source of the cash was suspicious, and they only stayed for about 60 minutes each time they left the country, and suspected that they had never entered Macau or Zhuhai.

The customs officer launched an operation with the assistance of the police and successfully intercepted two vehicles, arrested two male drivers, and seized 20 million Hong Kong dollars in cash on the trailer. During the follow-up investigation, the Customs found that the two seven-person car drivers involved had both entered and exited a money change shop in Kwun Tong. Some of the cash was suspected to be related to the money change shop.

Haiwei launched a follow-up arrest operation from 19 to 23 this month. More than 40 customs officers raided 3 residential units in the New Territories and a licensed money changer in Kwun Tong. The other target was arrested first. The driver of a seven-person car in Kwun Tong also seized about HK$300,000 in cash, closed-circuit television recordings, a batch of receipts and mobile phones in the Kwun Tong exchange shop. As the person in charge of the exchange shop failed to provide a reasonable explanation on the source of the cash involved, Therefore, the customs also arrested a director and a staff member of the money changer.

It is reported that the five arrested men, aged between 40 and 43, were respectively suspected of "conspiracy to deal with property known or believed to represent the proceeds of an indictable crime" (commonly known as money laundering) and violations of the "Physical Currency and Unlawful Act" According to the Regulations on Cross-Border Movement of Registered Negotiable Instruments, one of the cross-border drivers was also suspected of providing false information when reporting. Five of them have been released on bail pending further investigation, and their total assets of approximately HK$580,000 have also been frozen.

According to Huang Dateng, commander of the Customs Wealth Intelligence Coordination Group, the "Regulations on the Cross-Border Movement of Physical Currency and Bearer Negotiable Instruments" came into effect on July 16, 2018. The main purpose of the regulations is to detect the inflow or outflow of a large number of cash-like goods into or out of Hong Kong. , To ensure that criminals or terrorists cannot use this method to raise funds for their activities and launder the proceeds of crime.

Huang Dateng continued that the first two arrested drivers, one of them, carried cash out of the country 7 times between May and August this year, involving a total of 88 million Hong Kong dollars, all of which reported going to Macau. The other arrested driver made 10 cash declarations to the customs at the same time, totaling 78 million Hong Kong dollars. The amount was mainly destined for Macau, one of which was to Zhuhai.

The customs will continue to investigate the case and conduct in-depth investigations into the source of cash. It is initially suspected to be related to gambling and other activities. It is not ruled out that more people will be arrested. The Customs reminds the public that when dealing with funds from unknown sources, regardless of whether monetary rewards are involved, they have the opportunity to commit money laundering crimes.

According to the Organized and Serious Crimes Ordinance, any person who knows or has reasonable grounds to believe that any property, whether in whole or in part, directly or indirectly, represents the benefit of an indictable crime, and still handles the property, it is considered crime. Once convicted, the maximum penalty is a fine of 5 million yuan and imprisonment for 14 years, and the proceeds of related crimes can also be confiscated.

According to the "Regulations on the Cross-Border Movement of Physical Currency and Bearer Negotiable Instruments", anyone makes a declaration for a large number of cash-like items (that is, with a total value of more than 120,000 Hong Kong dollars), and the declaration contains any information that is false in essential items. It is a crime. Once convicted, the maximum penalty is a fine of 500,000 yuan and imprisonment for two years.